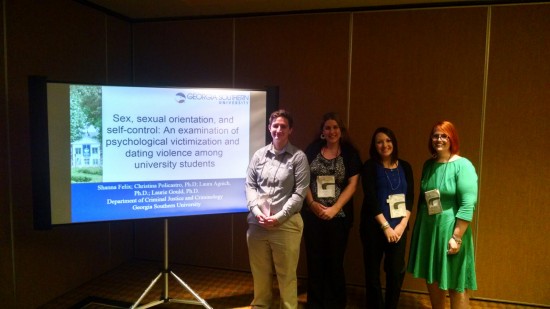 Justin Hoyle working with Dr. Bryan Miller and Dr. John Stogner of the UNC-Charlotte presented his paper “Synthetic Highs: Exploring Predictors of Synthetic Cannabinoid Use in a College Sample,” which looked at competing criminological theories and their ability to predict synthetic marijuana use finding that social learning theory provides a better explanation than strain and low self control.

Finally, Melanie Hart presented her paper, “Mass School Shootings: Predicting the Usage of Firearms in Acts of School Violence,” and found that white perpetrators and those who target high schools and colleges are more likely to use firearms to carry out acts of mass violence in schools.