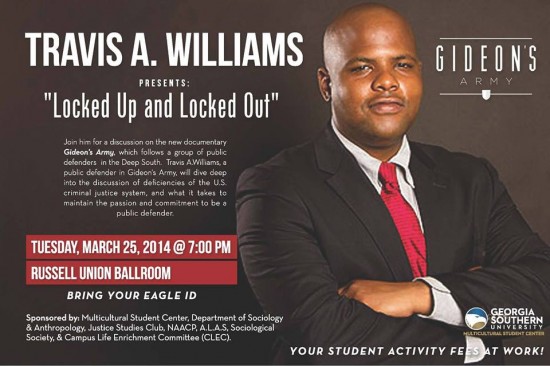 Travis A. Williams, Esq., a FAMU alum, will be speaking on Tuesday, March 25th at 7:00 pm in the Russell Union Ballroom. His presentation titled “Locked Up and Locked Out” is based on the new documentary “Gideon’s Army” (http://gideonsarmythefilm.com) which follows a group of young public defenders in the Deep South who contend with low pay, long hours and staggering caseloads to represent the poor. The film’s title comes from the landmark 1963 Supreme Court ruling in Gideon v. Wainwright that established the right to counsel to defendants in criminal cases who are unable to afford their own attorneys. Travis A. Williams, a public defender in “Gideon’s Army”, dives deep into the discussion of deficiencies of the U.S. criminal justice system, including mass incarceration, and what it takes to maintain the passion and commitment to be a public defender.

This is a free event, but students are asked to bring their Eagle ID for entry.