Department of Public and Nonprofit Studies

It’s no secret that housing prices have increased in Statesboro, but what factors have led to this? On November 2nd, the Georgia Southern student chapter of the International City-County Managers Association (ICMA) hosted an Affordable Housing Crisis Forum at the Carroll Building on the Statesboro campus to discuss this issue.

“As part of the program, we have a focus in local government management,” said Dr. Candice Bodkin, student chapter advisor for Georgia Southern ICMA said of the organization. “And so we are trying to help our students make the connections between what they’re learning in class and what they potentially could do as a career in local government.”

The ICMA is known for helping local governments create thriving environments for their constituents. They do this through professional leadership development, member service, research and policy, outreach, and other tactics.

Many students attended the forum, and the meeting was livestreamed on Instagram for those who couldn’t make it. Three guest speakers shared vital information about the current status of affordable housing in Statesboro.

Patterson talked about the adverse effects of affordability constraints and their negative impact on a household.

“If housing cost burden increases above that 30% threshold of income, elementary age children’s math and reading scores decline pretty rapidly,” Patterson said. “On average, we see declines in mental health, reduced healthcare spending, and people giving up on prescription medication. When your household is burdened by living in a lower quality neighborhood, it reduces the child’s likelihood of going to college.”

Another thing Patterson talked about is redlining and the racial equity implications on housing policy. As she explained in the lecture, Area A1 of a district in Savannah might be labeled as a green area. This is comprised of high, dry land subdivided into large lots marked as white property. White Americans will mostly live in this area, while minorities and second-class whites will be directed toward red regions. These properties are generally in poor repair.

“About 74% of the red areas are still low-income areas,” said Patterson. “The majority also continue to be racially segregated from economic opportunity. A 2020 study looked into persistent health impacts of redlining and found the average life expectancy of historically red areas was 3.6 years less than those that were not redlined. These districts also possess greater chances of asthma, diabetes, hypertension, high cholesterol, kidney disease, and obesity, all of which heightens the risk of morbidity from COVID-19.”

Statesboro’s City Manager Charles Penny was next up to talk about the things that impact Statesboro housing the most.

“Part of what impacts our housing is a lot to do with the university and the city,” he said. “The private sector really responds to demand, and the greatest demand is for students.”

According to Penny, about 69% of housing in Statesboro is intended to be occupied by mostly the student population, and this impacts single-family housing as well as affects the pricing of apartments.

“When you see apartments going up, most of those units are for students,” Penny said. “And then those apartments become older, someone will build a new shiny housing unit, and then, for what I might call affordable housing, (renters) will go to those older units that are available.”

City of Statesboro Planning and Housing Administrator Justin Williams talked about how the zoning ordinance in Statesboro has been out of date for quite a while now.

“It was adopted in 1978, I believe, but if you think about that, the housing market itself has drastically changed,” Williams said. “Now we’re faced with an issue within our community where you have older neighborhoods that will have a dilapidated house that can be torn down, but you can’t put a house back in that location. So there’s changes that have happened since these houses have been built, and we’re catching up.”

According to Williams, his department has been making many changes to update housing in the city in a short time.

“One of the things that happened in regards to this town is the adoption of a townhome ordinance,” he said. “So we didn’t have a policy in place. So people were coming into the city and really trying to kind of put together how they can make a housing project happen. So now we’re moving away from that.”

Williams hopes that by April of next year, documents on the ordinance will be put in place to help regulate zoning better.

From problems to solutions

The goal of the forum was to identify and address problems by focusing on local solutions. Grice Connect is proud to offer regular public access to and updates from our Statesboro City Council and Bulloch County Commission meetings and encourages all citizens to get involved to help our leaders make those solutions possible.

ICMA is a professional and educational organization representing appointed managers and administrators in local governments throughout the world. Members receive bi-weekly newsletters and the monthly publication of Public Management magazine. The Georgia Southern Department of Public and Nonprofit Studies is home to an ICMA Student Chapter, which affords all MPA students a free student membership. 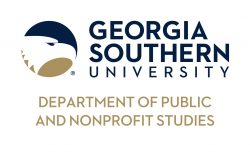 Department of Public and Nonprofit Studies