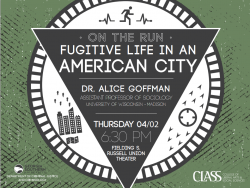 The Department is excited about an interdisciplinary speakers’ series that has been developed to highlight and address the role of race in community and justice issues.  The series, which will feature speakers from our own department as well as Sociology and History, is being co-sponsored by not only these programs, but also the CLASS Dean’s Office, the Multicultural Student Center, the Justice Studies Club, the Sociological Society, the Phi Alpha Theta History Honor Society, and the Campus Life Enrichment Committee.

The series will culminate with a lecture by the University of Wisconsin-Madison sociologist Dr. Alice Goffman  – “On the Run: Fugitive Life in an American City” – where she will detail her pivotal research in a Philadelphia neighborhood, which highlights the war on drugs, police surveillance, and the experiences of residents living in this high crime neighborhood.  Her research has received both critical acclaim and criticism for its portrayal of life in this impoverished, urban neighborhood.