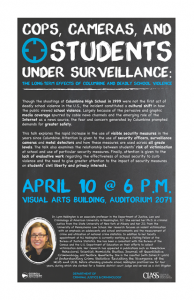 Dr. Lynn Addington, associate professor in the Department of Justice, Law and Criminology at American University in Washington, D.C, will be guest speaking on Thursday, April 10th at 6:00pm in the Arts Building Arts Auditorium 2071 for the department’s 2nd annual guest lecture series.  Her lecture is entitled, “Cops, Cameras and Students under Surveillance:  The Long-Term Effects of Columbine and Deadly School Violence.”  This talk will explore the rapid increase in the use of visible security measures in the years since Columbine, including the use of security officers, surveillance cameras and metal detectors. The talk will also examine the relationship between students’ risk of victimization at school and use of particular security measures.  Finally, Dr. Addington will discuss the lack of evaluation regarding the effectiveness of school security to curb violence as well as the need to give greater attention to the impact of security measures on students’ civil liberties.

Dr. Lynn A. Addington is an associate professor in the Department of Justice, Law and Criminology at American University in Washington, D.C.  She earned her Ph.D. in criminal justice from the University at Albany (SUNY) and her J.D. from the University of Pennsylvania Law School.  Her research focuses on violent victimization with an emphasis on adolescents and school environments as well as the measurement of crime and utilization of national crime statistics.  In addition to her faculty appointment at AU, Professor Addington currently is working as a Visiting Fellow at the Bureau of Justice Statistics.  She also has been a consultant with the Bureau of the Census and the US Department of Education on their efforts to collect victimization data.  Her recent publications have appeared in outlets including the American Behavioral Scientist, Homicide Studies, Journal of Quantitative Criminology, and Justice Quarterly.  She is the co-editor (with James P. Lynch) of a volume of original research entitled Understanding Crime Statistics: Revisiting the Divergence of the NCVS and UCR (2007, Cambridge University Press). Prior to attending graduate school, Professor Addington practiced law for four years during which time she clerked for a federal district court judge and worked as a civil litigator.