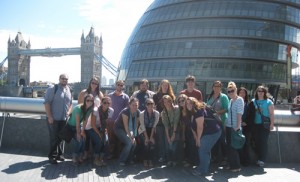 Dr. Bryan Miller recently returned from his Summer 2012 study abroad in London. He and his students learned about criminal justice and the history of crime and punishment in London. The class visited some of the historical execution sites of London including the Tower of London, West Smithfield, Wapping Execution Dock, Tyburn, and Horsemonger Lane Gaol.

The students learned about Jeremy Bentham’s idea of the Panopticon and got to visit the site of Millbank Prison. The class met with Dr. Patricia Dark of the Southwark Historical Library and learned about the history of debtor’s prisons including the Clink, Marshalsea (where Charles Dickens’ father was imprisoned), and the King’s (Queen’s) Bench Prison.

Students got to go to the City of London Police Museum and had the opportunity to meet with the mounted unit and their horses. The class observed Parliament in session and visited the Supreme Court, Royal Courts of Justice, Crown Court (Old Bailey), and Tower Bridge Magistrate Court.

In addition, the classes learned about Jack the Ripper and traced his steps through the East End of London. Students should definitely think about doing a study abroad in the future.