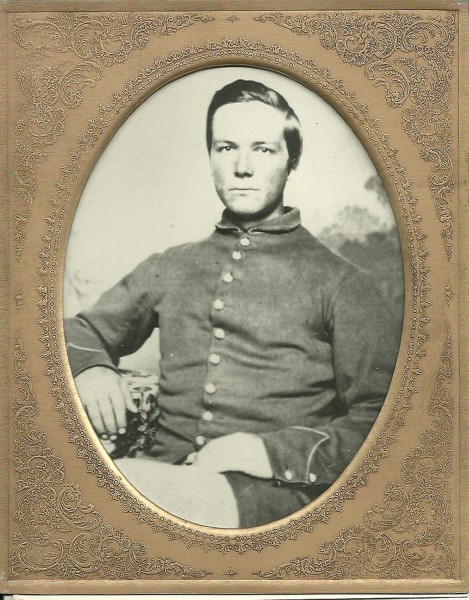 Adelbert Knight was one of nine children born to Abner and Julia Ann Fletcher Knight in Lincolnville, Maine on January 16, 1841. Unfortunately, four of Adelbert’s siblings died at or under the age of 21. One of his two older brothers, Jonathan (a Private with the 4th Maine Volunteer Regiment) died at age 23 after being captured during the Battle of First Bull Run (a.k.a., First Manassas), only 34 days after enlisting. He was imprisoned at several locations in Virginia, Alabama and North Carolina, for a total of about 312 days. Ten days after being paroled due to illness, he lost his personal battle with scurvy at City Hospital on Blackwell Island (now Roosevelt Island) in the East River of New York City on July 6, 1862. He was buried in Cypress Hills National Cemetery in Brooklyn, NY, with a memorial to him on the back of his parents’ gravestone in Lincolnville, Maine. His oldest brother, Augustus, lived in Montana, where he was mining for gold, and avoided the war. At this time, there has been no indication (back in 1862 or now) whether any of the Knight family knew of Jonathan’s ordeals, as the Adjunct General’s Reports noted that Jonathan was killed during the First Battle of Bull Run.
Adelbert enlisted in Portland, Maine at age 21 on March 26, 1862, as a Private in the 11th US Infantry, Co. F, 1st Battalion (approximately 2 months before his brother’s death). However, he only started writing in his diary on December 11, 1862. In April 1864, he was promoted to Color Guard for his Regiment. During this time of the War and where his Regiment was located, there were few battles and Adelbert found the time (in addition to writing letters) to transcribe his first diary into a second one, allowing him to send the first diary home (with a letter written in the diary) to his mother, in addition to other personal items not required (e.g., winter clothes), as well as other things (aka, “trinkets”, “souvenirs”, etc.) that he found after the battles in which he had been engaged.
From online records, the 11th US infantry fought in about 20 major battles, and Adelbert fought in 17 of them, including , Second Bull Run, Antietam, Fredericksburg, Chancellorsville, Gettysburg and Wilderness, before being captured during the Battle of Cold Harbor, outside Richmond, VA on June 2, 1864. He notes that approximately 45 men from his regiment were captured, with a total capture of 600 Union soldiers that day.
Adelbert entered and was detained in Libby Prison in Richmond on June 3, 1864. He was confined in a tobacco warehouse that held 250 prisoners on the floor he was assigned. He left Libby Prison six days later by train on June 8th and headed south to Georgia.
On June 14, 1864, Adelbert arrived in a small community (approximately 600 miles south of Richmond, VA and 125 miles south of Atlanta) called Andersonville, GA, where Camp Sumter (aka, Andersonville Prison) was located. The following day, after a relatively short walk, he entered the prison’s stockade area of approximately 16.5 acres. Food and consumable water were scarce and, to survive, decided to sell his ink and pen for bread, only ten days after arriving at Andersonville. It appears that he tried using other ink products (“homemade” possibly), but decided to use lead (from pencils or bullet shrapnel), as the ink(s) he tried using soaked through the pages of his diary. He continued to keep writing in his diary until his last entry on February 20, 1865. Over the years, the lead-written writing became difficult to read at times. This became a challenge when I transcribed the diary in 1970 for a high school class project. 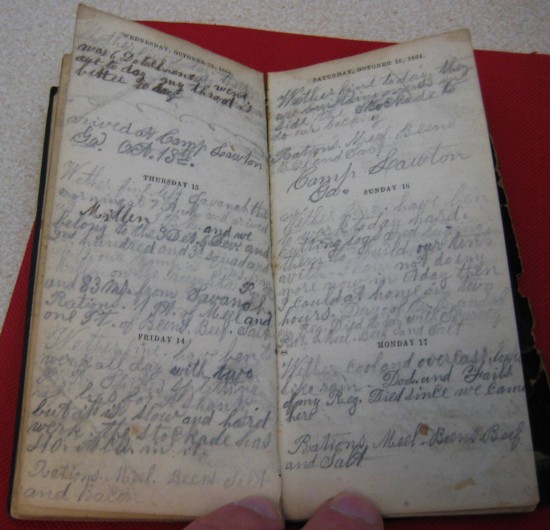 His daily diary entries were short but to the point. He describes the weather, the rations he received, the soldiers who were severely ill or died; and the “news” (i.e. rumors usually) going around about the war as well as the prison he was in, some true and some false. With rations being minimal, there was food available for a price, such as molasses ($12.00/gallon), eggs ($1.00 each), potatoes ($1.50/dozen) and onions ($0.25-$1.25/each).
During his incarceration, Adelbert worked on expanding the stockade area from 16 acres to 26.5 acres. When he arrived on June 15th, there was a ratio of one (1) acre for every 1,255 prisoners. As he left on September 28, 1864 for Savannah, the ratio decreased to 386 prisoners to every acre inside the stockade. This was due in part to the increased stockade area, but also from prisoner movement to other prisons (for exchange or hospitalization), prisoners changing their allegiance to the Confederate side, as well from death due to sickness and disease. Such deaths were caused by conditions such as lack of acceptable shelter (if any) during the hot and cold weather months, poor health and hygiene, and malnutrition. The National Park Service identified some of the reasons for the high death rate at Andersonville to be from abscess, anasarca, ascites, asphyxia, catarrh, constipation, diarrhea, diphtheria, dysentery, enteritis, erysipelas, gastritis, hemorrhoids, hepatitis, hydrocele, icterus, laryngitis, nephritis, pleurisy, rubeola (measles), scurvy, smallpox, tonsillitis, typhoid and ulcus.
On September 28, 1864, after imprisoned for 106 days in Andersonville, Adelbert left by railcar for Savannah, where he stayed for 14 days. He entered Camp Lawton in Millen, GA on October 13, 1864, which was approximately 83 miles northwest of Savannah. He wrote in his diary the day he arrived:
“Wether fine left Savanah this morning at 7a.m. and arrived at Millen 1 p.m. and we belong to the 3 Det, 6 Div. and 2nd hundred and 3d squad and No. 19 our Camp is 5 ms from Millen on the Augusta R.R. and 83 ms from Savanah. Rations. 1 pt. of Meel and one Pt. Beans. Beef. Salt”.
The prisoners used railroad spikes to split logs for shanties (and were possibly used for constructing the stockade walls as well). Within a few days of arriving at Camp Lawton, several soldiers of his regiment died (some due to scurvy, which Adelbert started to contract due to poor rations probably). Rumors continued to spread about possible exchange, but it never occurred until the following year for him.
On the second day at Camp Lawton he mentioned “The stockade has 40 men in it” and the third day noted “building ovens inside the stockade to do our backing” (i.e. baking).
Adelbert did considerable manual labor, as his diary mentions for October 16, 1864:
“Wether fine. Have been to work to day hard. Cutting logs and luging them to build our tent with. I can not do any more now in A day then I could at home in two hours.”
There was considerable “chatter” about exchanges of prisoners, but more and more prisoners were arriving at the same time (with no shelter for them, but plenty of money for gambling).
There was an Election on November 8, with Abe Seincock getting the majority of the votes (834). The following day prisoners were inspected to determine the most in need of clothing. Per Adelbert’s diary, on November 14th, doctors inspected the sick for potential of a future exchange. At this time food could be purchased, such as $0.25 per Qt. of Meel or Beens, $0.25 per pint of rice, $2.00 per quart; and one bushel of sweet potatoes for $40.00 in Confederate money or $8.00 in Green Backs. Rations that day consisted of one gill (half cup) of rice, about one quart of sweet potatoes and 5 oz. of Beef and salt. 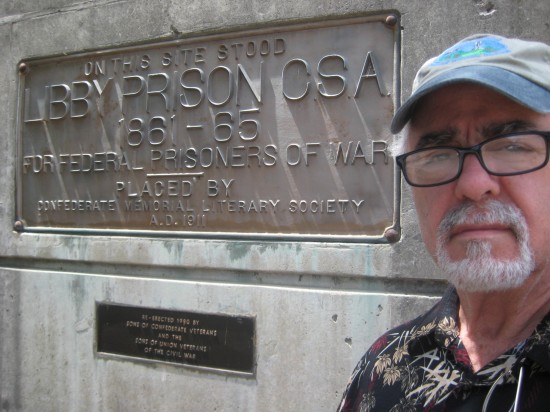 Adelbert notes in his diary for November 20, 1684 that all prisoners captured in 1863 (as well as those who were sick) were to be exchanged. On November 22, 1864, Adelbert once again was brought to Savannah prior to entering a stockade in Florence, SC on November 27, 1864. On November 29, nine hundred prisoners came into camp, leading to a total of 11,000 prisoners in camp. However, 1,100 sick prisoners were taken out the day before. The weather was abnormally cold for that year and the prisoners had to build shanties (similar to Andersonville) to keep warm and dry.
It appears from his diary that he left Camp Florence on February 17, 1865 (although his diary mentions leaving Millen) with a final entry on February 20, 1865 in Wilmington, noting possible exchange. Military records show that Adelbert was paroled on February 27 or 28, 1865 in South Carolina and discharged May 2, 1865 in Maryland. He was a prisoner for about 270 days.
As noted above, Adelbert’s diary was lost around February 1865, but found by a fellow Andersonville prisoner from Illinois named Noah Potts (it did not appear that they knew each other), who used the diary on occasion (for minor personal entries) for almost two years until he sent the diary back to Adelbert (unsure how) with a brief note written in the diary to Adelbert dated November 15, 1867:
“Mr. Knight, I found this book at Willington, SC. Thought it might be of some use to you. Please write me a line when you receive this if you please. Noah Potts, Herman Knox Co., Ills.”
Adelbert returned to Lincolnville, Maine to work the family farm and marry Sarah Avesta Whitmore (a neighbor who wrote during his time in the service) in December 1865. He became a member of the Grand Army of the Republic (GAR) Post 42 in Belfast. His mother sold the farm in 1873, and purchased a house in Belfast (approximately 15 miles northeast of their Lincolnville farm) where Adelbert became a skilled craftsman. His mother passed away in 1886 and was buried with her husband and other children in Fletcher Cemetery in Lincolnville. Adelbert and Sarah had 5 children, one being my grandfather, Burt Leroy Knight. Adelbert passed away in 1913 and Sarah in 1916. Both are buried together in Grove Cemetery in Belfast with some of his children and grandchildren. 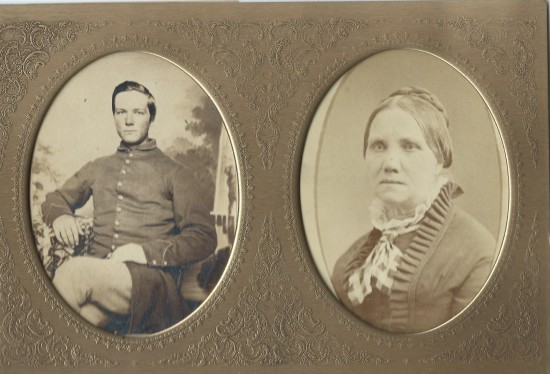 Adelbert and his wife Sarah (Whitmore)