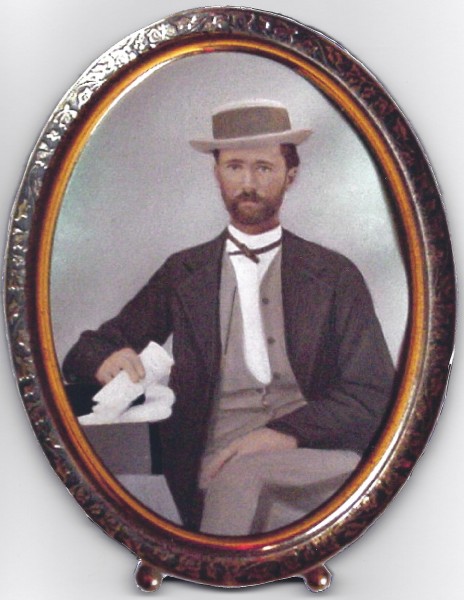 My great grandfather, Jesse Taliaferro Carter, was born in Warren County Georgia on August 26, 1846 to Wiley Carter Sr. and Ann Ansley. Jesse’s mother died when he was a very young child and his father then married Sarah Wilson, a widow. In 1851 Wiley moved his family to Schley County where he became a successful planter with a plantation containing 2400 acres in both Schley and Sumter counties. Soon after the war began, two of Jesse’s older brothers, Wiley Carter Jr and Littleberry Walker Carter, great grandfather of President Jimmy Carter, joined the Sumter Flying Artillery which was assigned to the Army of Northern Virginia.

Jesse’s father died on March 4, 1864. A few months later, seventeen year old Jesse enlisted as a private in Company F, Third Georgia Reserves.  He brought his percussion fowling piece shotgun with him when he enlisted.  Initially, he served as a guard at Andersonville, which was located approximately 20 miles from his home. When Camp Lawton was opened, Jesse and his unit served as guards there. When Camp Lawton closed after only six weeks, Jesse and the Third Georgia Reserves joined other Confederate forces at Coosawhatchie, South Carolina, defending the railroad which ran from Savannah to Charleston. From December 6 to December 9, 1864, the Confederate forces fought a Union force which was composed of units from the Union Army, United States Colored Troops, Naval Infantry, and the United States Marine Corps. The Confederates prevailed and prevented the Union force from cutting the railroad. The Third Georgia Reserves suffered numerous casualties during this engagement, including Jesse who was slightly wounded in the neck on December 6th. On Easter Sunday, April 16, 1865, Jesse and his unit fought in one of the last engagements of the war, the Battle of Columbus, Georgia.

After the war, Jesse returned to Schley County, where he farmed. By 1870, he was married to Nancy “Nan” Jane Spivey and had a young child. Jesse and Nan raised six children. Shortly after the birth of their last child, Nan died. On October 1, 1899 Jesse married Susan Ann Augustus “Gussie” Jones. By 1910, he had moved his family to Richland in Stewart County, Georgia, and had become the owner of a small grocery/general store. Jesse and Gussie’s marriage produced two children: a daughter, Bobbie, and a son, William.  My grandfather, William Jackson Carter, was born December 16, 1901.

As an adult, my grandfather wrote the following about his father Jesse: 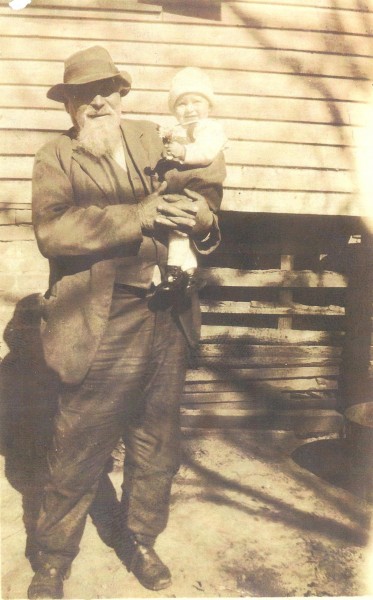 “My dad had a horse and buggy and even when the automobile came he stuck to his favorite mode of transportation and had no use for the new contraption which scared his horse and thus added to his hope that the newfangled plaything would soon be forgotten. Old Minnie was smart and could take us to our favorite fishing spot and home again even on the darkest night and loved the long walk to Ponder’s Mill, our favorite swimming hole where Papa would take us on Sundays. We did not have a saddle but a croker sack (burlap bag) served pretty well for a bumpy ride on Minnie’s back. Papa was pretty old, 55, when I came along, and had very little except our home, a small grocery store, and Minnie and the buggy.”

Jesse died in Richland on February 27, 1924 from “uremic poisoning” and is buried beside “Gussie” at Harmony Cemetery in Richland. His brother, Wiley Carter Jr, a seriously wounded veteran of the Sumter Flying Artillery, also rests at Harmony.  Jesse’s fowling piece which he carried throughout the war is on display at the Georgia Southern University Museum.

Below is a transcription of a newspaper article listing the casualties of the Third Georgia Reserves which occurred during fighting on the 6th & 9th of December 1864 near Coosawhatchie, South Carolina. The article appeared on the front page of the Jan 13, 1865 issue of “The Daily Sun” newspaper published in Columbus, Georgia. I obtained microfilm of the newspaper from the University of Georgia Main Library in Athens. The Third Georgia Reserves and the First Georgia Reserves, who had also served at Camp Lawton, were part of the Confederate forces which successfully defended the railroad which ran between Savannah and Charleston from being cut by the Union forces. 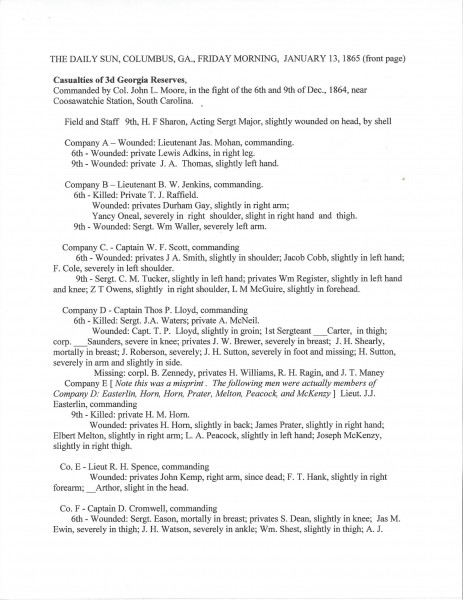 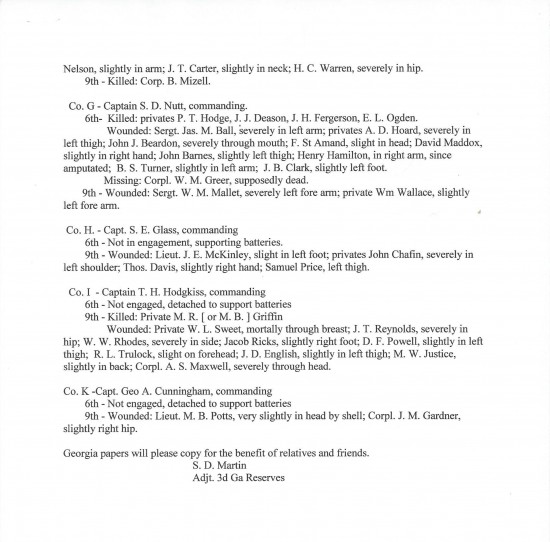