Home > Artifact of the Week

Artifact of the Week

Prisoners were held at Camp Lawton from about October 10 through November 22, 1864. During the 150th anniversary of the six weeks the camp was open, we will be discussing and illustrating artifacts that represent different aspects of the prisoners’ lives. These small items, discarded or lost by prisoners–military hardware, personal items brought from home, food remains–can bring us closer to understanding what life was like on a day to day basis for those thousands of prisoners who lived at the camp in the fall of 1864.

Today’s artifact is a nail. While a seemingly uninteresting artifact, this nail, and other ones like it that we have recovered, can tell us a lot about how the prisoners lived. The nail was machine cut. Throughout most of the 19th century, machine-cut nails were by far the most common. They were produced from flat sheets of iron, which were then cut by heavy machinery. They were (and are) also often called square nails. Modern wire nails were not mass-produced until after the Civil War had ended. During excavations in the prisoner encampment area at Camp Lawton, we have recovered dozens of these cut nails. As with railroad spikes that have also been recovered on site, the prisoners probably became very adept at scavenging anything they could use. These artifacts undoubtedly served to hold together the huts that prisoners fashioned from whatever limbs and scraps of lumber they could scrounge. We are currently in the process of mapping these and other artifacts in an effort to more precisely locate where many of these huts were.

Today’s artifact is a Colt L Tool. It was a combination tool used on Colt revolvers, such as the 1851 Navy and 1860 Army models. The long end served as a screwdriver. The short end was cylindrical, and the tip was a nipple wrench, fitting over the nipple, or cone, for each shell in the pistol cylinder. This iron tool was recovered from the prisoner encampment. Although firearms were obviously taken from prisoners, these kinds of small tools often stayed with them. The artifact has been conserved in the Georgia Southern archaeology labs. The photograph shows the artifact prior to conservation. 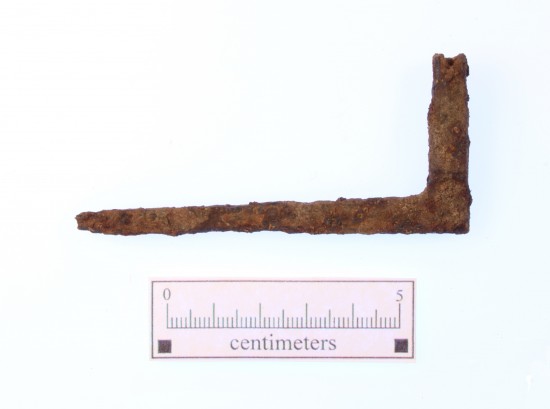 Colt L Tool prior to conservation

Our artifact of the week is a brass keg tap. These were items in regular use in military camps in the north and south. They were used to tap wooden barrels that held different liquids, such as vinegar and beer. This artifact was recovered from a part of the site at Camp Lawton that we believe is a Confederate officer’s quarters. It was found in association with other military-camp gear from the period. The segment that would have been driven into a barrel has been damaged, which is probably why it was discarded. 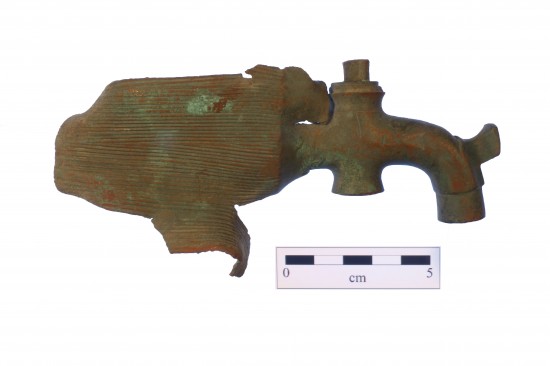 Our artifact this week is a tourniquet buckle. The buckle was recovered in 2010 during a metal-detector survey in the prisoners’ area. The buckle is made of brass and iron, and still has a fragment of the heavy cotton fabric that served as the strap. It was produced by Julius Tiencken, who manufactured medical equipment for the Union Army. We don’t know who brought the tourniquet buckle into the camp, but many prisoners held in the camps had a variety of injuries sustained in combat and while held in captivity. The buckle may have been used to treat a prisoner. Alternatively, it might have served other purposes, such as a trade item within the stockade. 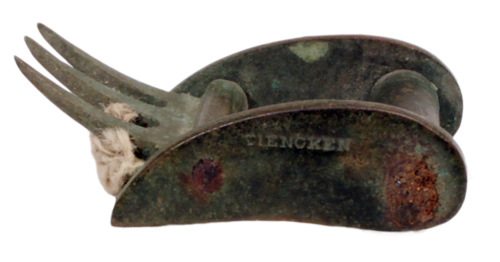 The tourniquet buckle stamped “Tiencken”. Cotton fabric visible on the left, just beneath the tines.

This week our artifact is a segment of a two-tined fork. As with the knife fragment from last week, these utensils were carried by most soldiers and were basic parts of their camp gear. In a POW situation, they were probably used for other activities in addition to eating, because prisoners were allowed to keep only a small portion of their gear. This might account for why one of the tines on this fragment is bent. The photograph below shows the artifact before conservation. Beneath the photo is the scanned image of the artifact. 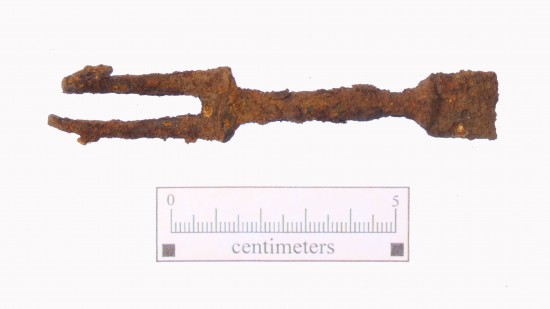 two-tined fork, prior to conservation

Our second artifact is a knife fragment. Prisoners were not allowed to bring in large knives, such as the Bowie knives that many carried, but they were generally allowed to keep their utensils, including kitchen/butter knives, spoons, and two- and three-tined forks. The knife fragment includes large portions of the blade and tang. The handles were probably bone or wood, but are missing, as are the rivets that attached the handles to the tang. These utensils, in addition to being used for cooking and eating, were probably also used for other activities, because the prisoners had so few items. The photograph shows the artifact before (above) and after (below) conservation in the lab. Below the photograph is a link to a 3D image of the knife. 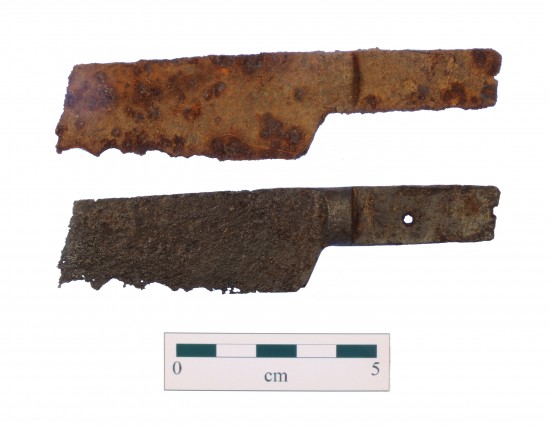 knife fragment, before (above) and after (below) conservation

Our first artifact of the week is a Union Army brass coat button. Early in the war, buttons were stamped with a letter designating a branch of the service. In this case, the “I” signifies Infantry. Later in the war these designations were removed, and “general service” buttons were produced. Several of these buttons have been recovered from the prisoners’ encampment at Camp Lawton, and probably represent a trade item or form of currency in the camp. With a lack of real currency, buttons, grocery tokens, and other small items became a replacement, within the stockade and for trade with guards. Please click on the link below to see a scanned 3D image of the button.